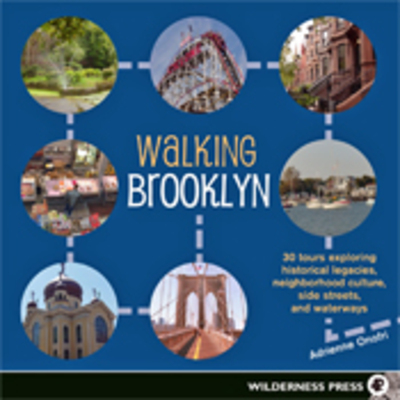 “A book about Brooklyn published by the Wilderness Press? Turns out it’s a wonderful idea. ...a charming, practical and informative guide to seeing the familiar and undiscovered features of the borough on foot.” –New York Times

Walking Brooklyn is a guidebook, but not the kind that simply directs readers to a landmark building here, a popular restaurant there. Instead, the book lays out walking routes that give you a feel for a neighborhood’s heritage and takes you past its noteworthy sites such as churches, monuments, parks, cultural institutions, eateries, and bars. The thirty walks in the book—which range from under two miles to over six—encompass more than fourty neighborhoods, including those that that rarely appear in travel stories or books about Brooklyn, like Gerritsen Beach, East New York, and Prospect-Lefferts Gardens.

Brooklyn has been getting a lot of attention lately both as a tourist destination and as a place to live, with restaurants, nightspots, and art and performance venues opening. Luxury residential high-rises are reshaping the skyline and several areas being gentrified or redeveloped. In composing each walk, I wanted readers to get a sense of a neighborhood’s past as well as what defines it today and how it is evolving. The book will not be updated annually but is intended to have a shelf life of some years. It was a challenge to write about Brooklyn in the midst of its renaissance and building boom; I was continually trying to ascertain what landmarks I pointed out would still be there long after the book was published.

There are plenty of names, dates, and other details in the descriptions of places on the walks, but since my background is as a travel writer and tour guide rather than a historian, I took a storytelling approach instead of an academic approach. I strove to make it interesting both to people familiar with Brooklyn history and personalities and to visitors to New York and those who may not know anything about the city’s most populous borough. In its first few months of release, Walking Brooklyn has proved popular with current residents and former Brooklynites, a famously nostalgic bunch.