Between Freedom and Bondage: Race, Party, and Voting Rights in the Antebellum North 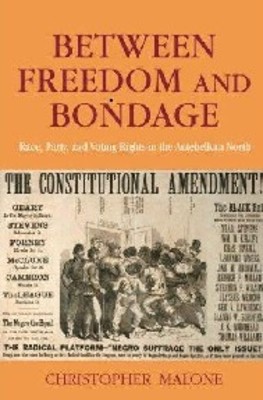 “Malone shows that the basic democratic issue of who shall vote intimately entwined with the role of race in the economy, in partisan competition, and ultimately in political culture.” ––Frances Fox Piven, distinguished professor of political science and sociology, CUNY Graduate Center

Between Freedom and Bondage is an analysis of the voting rights for African-Americans between the inception of the United States and the Civil War nearly 100 years later. In the early 1800s, states across the North struggled with the issue of citizenship for African-Americans, years before the debate on slavery began to dominate national politics. By examining voting rights in four states––New York, Pennsylvania, Rhode Island, and Massachusetts––I try to provide a much needed history of the social, economic, institutional, and cultural undercurrents that structured state policy on African-American suffrage.

I begin Between Freedom and Bondage in the summer of 2006, with the reauthorization of the landmark Voting Rights Act first passed in 1965. When President George W. Bush signed the reauthorization legislation in 2006, he referenced the fact that the VRA of 1965 allowed blacks to vote in the South for the first time since Reconstruction. Bush was right: most blacks were disenfranchised by the Jim Crow laws put in place in the South in the latter decades of the nineteenth century. But as I point out in Chapter 1, to begin the story of black enfranchisement there is to leave out an essential aspect of voting rights for African-Americans––the beginning of it. My narrative takes the reader back in time by connecting voting rights legislation to the little-known, earlier struggles for the right to vote for African-Americans in the antebellum North. In the Epilogue, I conclude the book by returning to contemporary racial politics, and I argue that the political transformations from the “Two Reconstructions”––the post-Civil War Era and the modern Civil Rights movement––can better be understood by understanding what happened with the right to vote for African-Americans in the early years of the Republic.