Paul A. Samuelson: On Being an Economist 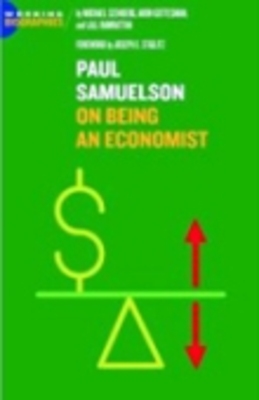 Paul A. Samuelson: On Being an Economist>/i> (Jorge Pinto Books, 2005) provides a detailed biography of the life and times of one of the most important economists during the 20th century and, in 1970, the first American to receive the Nobel Prize in economics. We coauthored the book with Lall Ramrattan, PhD, who teaches economics at University of California, Berkeley. Joseph Stiglitz, who received the Nobel Prize in Economics in 2001, wrote the foreword. The book was selected for inclusion in the Forbes.com Book Club.

The book traces Samuelson’s journey, beginning with his birth in Gary, Indiana; his undergraduate degree at the University of Chicago, and his graduate schooling at Harvard University, where he wrote one of the most important economic texts of all time, Foundation of Economic Analysis. The book analyzes Harvard’s failure to offer Samuelson a full-time academic position, a failure that led Samuelson to a position at the Massachusetts Institute of Technology, where he remains an academic today.

One aspect of the book that is of particular interest are the many quotes and observations from leading economists, many in personal correspondence with the coauthors. The book also contains personal recollections of Samuelson by Avinash Dixit and Nobel Prize economist Lawrence Klein. Experienced economists, students of economics, and novices to the field will find this book both highly readable and informative.