Sweeping the German Nation: Domesticity and National Identity in Germany, 1870–1945 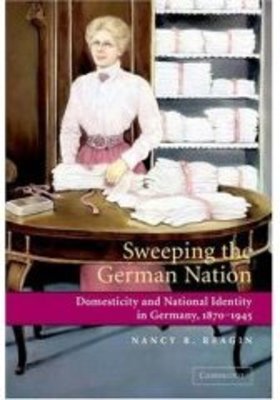 For additional information about this author see her personal webpages

Discussing Sweeping the German Nation: Domesticity and National Identity in Germany, 1870–1945 (Cambridge University Press, 2006) by Nancy Reagin, PhD, Professor of History, and Chair of the Department of Women’s and Gender Studies

I chose this topic so I could explore the gendered aspects of German nationalism. When I began my research, nationalism was seen as a largely masculine phenomenon, and women’s historians tended to ignore it. It was usually only discussed in terms of its more extreme or vivid manifestations: political organizations that seek independence for an ethnic group, or paramilitary groups. In such older narratives, the nation itself was presented as a work of men: its origin was told as a story of war, conquest, or revolution.

But I felt that nationalism can also be expressed in the more everyday forms that help to create and sustain national identity: the shared rituals, values, symbols, and assumptions that bind people together as a nation. And that sort of banal, everyday nationalism was particularly important in Germany, which was a late-forming nation. Germany’s borders and forms of government have fluctuated regularly since its creation in 1871: not all German speakers (then or now) live inside those boundaries. Germans struggled for decades about how to define or understand what it meant to be German, and who could or should be included in their national community; the fact that “Germanness” was still not a well-defined term left room for many nationalists and racists, like the Nazis, to try to define the national group in exclusionary terms. I wanted to examine the role that women played in creating and sustaining German national identity and nationalism.

The domestic aspects of Germanness were what really fascinated me; I’d lived in Germany for years and had noticed that lifestyle and household were important in the popular understanding of what it meant to be German (this is reflected, for example, in many popular sayings). So, I looked at records of home economics courses, housewives’ groups, and women’s magazines and memoirs to trace how the ideal of the “German” housewife and domestic practices became interwoven with Germans’ national identity before World War I. I was also interested in the role that this ideal played in German imperialism, so I looked at the records of colonial German households in German Southwest Africa before 1914. After 1918, these understandings of German domesticity were increasingly incorporated into public policy, and I did research on various Weimar government agencies to see how they tried to support and enforce a certain style of housekeeping as being inherently “German.” I also examined records of Nazi women’s groups and Nazi social welfare agencies to see how this domestic ideal of national identity was racialized after 1933. It underlay the housekeeping and consumption practices urged on German women (and implemented in occupied Poland) by Nazi women’s organizations.

So in the end, this project took me much further than I’d originally planned (in a chronological sense). But it was fascinating to examine how household management and lifestyle became central to Germans’ sense of who they were, as a people.