Still Separate and Unequal: Segregation and the Future of Urban School Reform 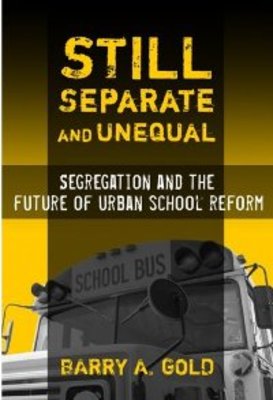 Still Separate and Unequal: Segregation and the Future of Urban School Reform by Barry A. Gold, PhD, Associate Professor of Management

Still Separate and Unequal: Segregation and the Future of Urban School Reform (Teachers College Press, 2007) documents and analyzes the implementation of the first four years of the landmark 1998 New Jersey Supreme Court Abbott V ruling and the first three years of the 2002 federal No Child Left Behind (NCLB) act. The research objective was to see if these unprecedented urban school reforms improved teaching and learning in four high-poverty low achievement urban elementary schools in New Jersey. Because the reforms proposed to change all elements of the schools except their population characteristics—two schools were African-American and two were Latino—a related but more important research question was: Can separate education be equal?

The answer to the first question is that teaching and learning did not improve and, in many cases, became less effective. For example, as measured by standardized tests, the reforms did not close the achievement gap between low-income minority inner city students and wealthy White suburban students. This was primarily because administrators and teachers rejected or modified the reforms to fit their understanding of the type of education appropriate for urban students, which as they understand it, is different than the type of education appropriate for suburban students. By focusing on test scores as the primary measure of student achievement, in a powerful example of an unintended consequence, NCLB endorsed and increased the use of ineffective teaching methods--rote drill and obsessive reiteration of “the basics”—often used in urban education that the Abbott V mandates tried to change.

Based on the ethnographic data presented in the book, the answer to the second question is that separate education cannot be equal. This is because the sociocultural ecology of segregation, which Abbott V and NCLB did not attempt to change, created a decision-making framework that reproduced the distinctive and less effective type of urban education.

The finding of the pervasive effect of segregation on the reform process argues that to improve educational opportunity some form of integration is necessary. This conclusion supports the 1954 United States Supreme Court Brown v. Board of Education ruling that separate education cannot be equal.

In June 2007, the United States Supreme Court will rule on the use of planned diversity to achieve racial balance in public schools. The January 8, 2007 edition of Justice Talking is an excellent debate of the complex issues facing the Court. Still Separate and Unequal: Segregation and the Future of Urban School Reform supports the use of planned diversity to improve equality of educational opportunity particularly under the conditions of extreme segregation characteristic of most metropolitan regions in the United States. .