The Imperial Presidency and the Consequences of 9/11: Lawyers Respond to the Global War on Terrorism 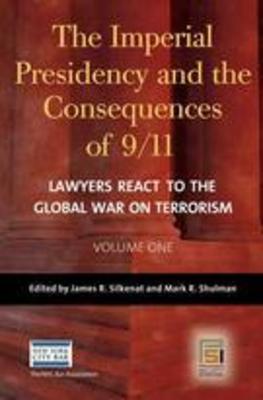 Over the past five years, members of the New York City Bar have produced an impressive variety of hard-hitting reports, letters, and briefs addressing issues arising out of the “global war on terror.” James Silkenat and I recently collected the most important of these into a book, The Imperial Presidency and the Consequences of 9/11: Lawyers Respond to the Global War on Terrorism (Praeger Security International, 2007).

For the most part, these publications have taken positions critical of the U.S. government’s conduct and of the legal justifications offered by the administration of George W. Bush. These critiques are non-partisan and represent the independent voice of the nation’s leading municipal bar.

Lawyers are frequently maligned as being amoral guns for hire willing to take any position that pays. Without them, however, the freedoms of expression and choice would be far narrower. Without them, more innocent people would be imprisoned or even executed. Someone must defend unpopular or marginalized people or rights are diminished for each of us. What lawyer jokes invariably ignore is the tremendous amount of work lawyers do on principle.

Bar associations around the country perform critical roles in channeling the creative and honorable impulses of lawyers. The New York City Bar Association is the largest and one of the oldest in the nation, established in 1870. For a century and a quarter, its members have worked to improve the law and its implementation. For much of its history, however, the Association has worked without much recognition outside the rarified circles of its membership.

Then as planes crashed into the twin towers on September 11, 2001, members of the Association sprang into action—not chasing ambulances but running in advance of them to rescue the wounded and distraught. In the months that followed, the City Bar served as a clearing house for assistance both to lawyers and to those who needed lawyers.

As important, Association members have devoted countless hours to research and write reports on the laws applicable in this new conflict. The Military Affairs Committee issued the first of these within a few months. This report decried the impact of President Bush’s Military Order of November 13, 2001 Regarding “Detention, Treatment, and Trial of Certain Non-Citizens in the War against Terrorism.” It contained prescient analysis of an issue that continues to plague us years later. The Association argued that the Administration should not carve out law-free zones in this and several other reports as well as amicus briefs to the Supreme Court and letters to senior Defense Department officials. One of the reports broke the story of the U.S. practice of “Torture by Proxy” that renders detainees to other jurisdictions in order to facilitate inhumane interrogations.

By the summer of 2002, the Association found itself facing another critical issue, whether the President had the authority to order the invasion of Iraq without an act of Congress. It concluded that he had not.

The Association’s vigilance for the rule of law after 9/11 has drawn members into some less predictable topics. One traditional role for the Association is to comment on proposed legislation. One recent such piece proposed using anti-terrorism laws to deter (or punish) activists seeking to protest the inhumane treatment of animals in a slaughterhouse. This may sound far-fetched, but similar laws have actually been enacted in other states.

The important work of the Association continues, but after five years, it seems like an appropriate time to collect its contributions to securing the rule of law in these tumultuous times. Over the course of American history, wartime administrations have frequently overstepped the legal boundaries. During the Quasi War of 1798 with France, President John Adams sponsored the notorious Alien and Sedition Acts. Abraham Lincoln suspended the writ of habeas corpus. Woodrow Wilson jailed dissenters for speaking out, including one man who had received nearly a million votes in the 1912 presidential election. Franklin Roosevelt’s administration was responsible for the odious internment of tens of thousands of Japanese-Americans. And Vietnam era presidents had their intelligence agencies collect information on domestic groups that were opposing the wars in Southeast Asia.

And yet, from each of these missteps, the nation’s constitutional order rebounded after the war ended. By the time of the presidential campaign of 1800, boisterous dissent had returned to American politics. Immediately after the Civil War, the Supreme Court ruled that Lincoln was wrong to suspend the most essential writ. Warren Harding ordered Eugene V. Debs released from prison. The United States apologized to its Issei and Nisei brethren and offered reparations. And the intelligence community was prohibited from conducting surveillance of U.S. persons. Unlike previous wars, however, the struggle to defeat global terrorism is one that may not end soon or neatly. So our legal system cannot wait until the danger has completely passed before righting some of its wrongs.

Indeed the pendulum appears to be returning to center. Two weeks after the Association released its war powers report, President Bush agreed to seek Congressional authorization before invading Iraq. In 2004 the Supreme Court found with the Association’s amici that the detainees at Guantanamo Bay were not beyond the law’s reach. And New York will not jail animal rights protestors for photographing poultry factories.

I hope this book proves useful in explaining how the rule of law fosters the interests of stability and security while maintaining the sphere of individual liberty. I expect that it illustrates the beneficial role that lawyers can play in the political process, helping to explicate the law—its objectives and its implications. And in the end, I hope that this book will encourage young lawyers to use their skills to serve their neighbors, their country, and their world.