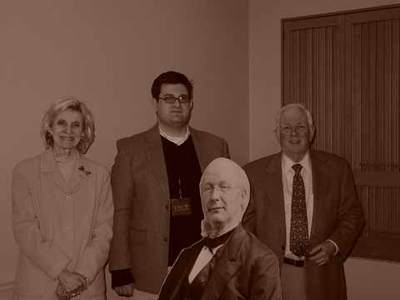 HORACE GREELEY (1811-1872), the 19th century journalist now best remembered for urging young people to 'Go west, young man,' also was a powerful publisher, reformer, Presidential candidate and advocate for African-Americans, women and the poor, a living embodiment of ideals embraced by Pace University two centuries later. This is particularly fitting because Pace's building at One Pace Plaza stands on the plot of ground where Horace Greeley's New York Tribune was published in the nineteenth century. Given its location across from City Hall, it is not surprising that the Tribune/Pace site figured prominently in historic events. During the Civil War Draft Riots, a mob attacked the Tribune building, looking for the abolitionist Greeley. In May 1970, the Pace building was attacked by rioters in support of the Vietnam War and opposed to anti-war demonstrators. In 1872, Greeley died on the Pleasantville campus, while under the care of Dr. George C.S. Choate. An exhibit of items about Greeley was on display at the Mortola Library in Pleasantville from February 3 - March 17, 2006 and at the Birnbaum Library in New York from March 27 - April 28. This picture features Dr. Marilyn Wiegold - University Historian, Brian Jennings - Librarian, and a member of the Westchester County Archives.