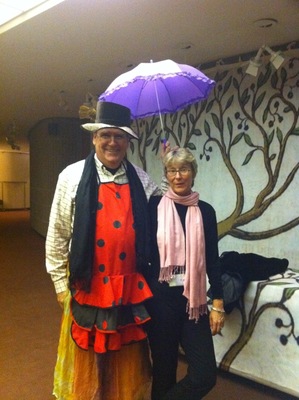 Martha Driver and her husband Tom Rhodes after her public lecture following the performance of Merry Wives of Windsor, Pace 2010.

Dr. Martha W. Driver is Distinguished Professor of English and Women’s and Gender Studies at Pace University in New York City. A co-founder of the Early Book Society for the study of manuscripts and printing history, she writes about book production, illustration from manuscript to print, and the early history of publishing. In addition to publishing 50 articles in these areas, she has edited seventeen journals in fourteen years. These include: Film & History: Medieval Period in Film 29, 1-4 (1999); a special issue of Literary & Linguistic Computing, “Teaching the Middle Ages with Technology” 14, 2 (June 1999); and the Journal of the Early Book Society (from 1997 through 2011). Her books about pictures (from woodcuts to film) include The Image in Print: Book Illustration in Late Medieval England (London and Toronto: British Library Publications and University of Toronto, 2004); The Medieval Hero on Screen: Representations from Beowulf to Buffy, edited with Sid Ray (Jefferson, N.C., and London: McFarland, 2004); An Index of Images in English MSS, fascicle four, with Michael Orr (Turnhout, Belgium: Brepols, 2007); and Shakespeare and the Middle Ages, with Sid Ray (McFarland, 2009). She is a co-editor of the Texts and Transitions book series published by Brepols.