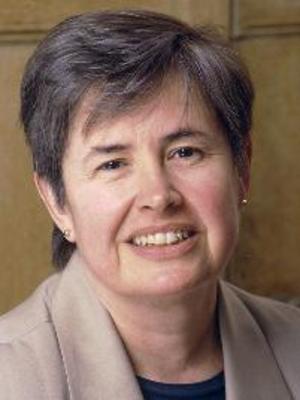 Susan M. Merritt, a member of the religious community of the Sisters of Divine Compassion, received her BA from the Catholic University of America, where she was elected to Phi Beta Kappa and graduated summa cum laude. She then went on to earn an MS and a PhD in computer science from New York University's Courant Institute of Mathematical Sciences. She began her academic career as a teacher of mathematics and computer science at Good Counsel Academy in White Plains, NY. A member of the College of White Plains (formerly Good Counsel College) faculty, she began her career at Pace teaching in both the Lubin School of Business and the Dyson College of Arts and Sciences. She was appointed the first and founding chair of the Department of Computer Science in 1981 and then became the first and founding dean of the newly established School of Computer Science and Information Systems in 1983. The school was later named the Seidenberg School in 2005 after Ivan G. Seidenberg, chairman and CEO of Verizon Communications, Inc. and Pace alumnus, endowed the school with a $15 million gift.

Under Dr. Merritt's leadership, Pace became one of the first universities in the country to combine software with systems development and applications in the same comprehensive school, and more than 20 educational programs and several research centers in computing were developed. After completing her 25th year as dean – the longest tenure of any dean at Pace - and her 35th year at Pace, Dr. Merritt relinquished the deanship in 2008 to assume the presidency of the Sisters of Divine Compassion. a catholic religious organization for women to which she belonged. Now Dean Emeritus, she remains a member of the Pace faculty

Additional information on Dr. Merritt may be obtained by going to her Pace University personal website. For the other aspect of her life highlighting her work as a member of the Religious of Divine Compassion (RDC), you may go to her official website as president of the society.