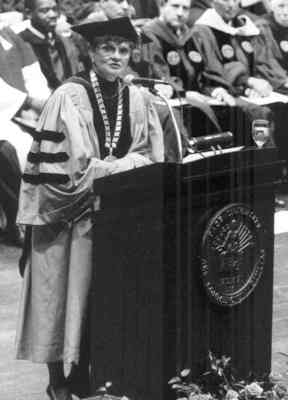 Patrica O. Ewers became the first woman President of the University when she assumed the university presidency in 1990.

The first in her family to graduate from college, Chicago native Patricia O’Donnell Ewers maintained Pace University’s commitment to Opportunitas throughout the 1990s.

Recognizing the increasing importance of technology in the classroom, in the business of higher education, and as a fundamental skill needed to succeed in many careers, she invested in human and technology resources for Pace. Her most notable accomplishment was the completion of the Campaign for Pace, which, by raising $61 million, quadrupled the University's endowment. Another of her priorities was to enhance the way Pace presented itself—many halls and buildings were renovated during her tenure. Ewers, like Homer S. Pace before her, was not only an administrator, but a teacher; she taught courses in literature and film. Ewers was also an active participant in many of Pace's theatrical productions.